Booming inflation, Russian’s war in Ukraine, wages increases – 2022 was the year that saw all of this. How can your company continue growing in those days? 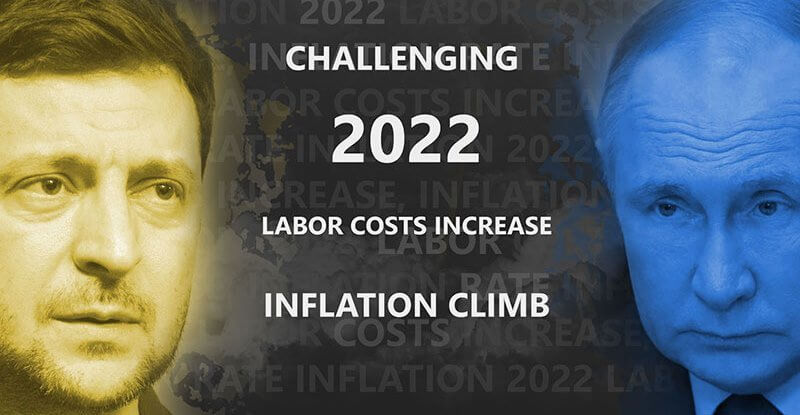 The last days of 2022 are flying by fast. This year was marked by two of the most discussed topics that have impacted a very large number of people and businesses all over the world. These topics were a huge global inflation and Russia's war in Ukraine, which became one of the main causes of the inflation.

Over the past three months I have been lucky enough to visit different countries of the world and everywhere from Paris and Rome to small island nations of Grenada and St. Vincent in the Caribbean, I heard very similar people's concerns about the rising food and fuel prices. Although politicians put all the blame for inflation on Russia's war in Ukraine as the main reason of inflation, they may be telling just part of the story. Inflation began galloping before the outbreak of hostilities in Ukraine, and the initial driver of steep inflation was the fight with COVID-19 pandemic. The governments of most countries, having put people at homes and deprived them of the opportunity to earn money as usual, had to help them financially. They started to print money in 2020 to give away to all who was not able to work, and to provide subsidies for organizations and companies that were requested to close their operations during the COVID-19 pandemic. At the same time the federal government kept the Federal Funds Rate as low as possible to support the economy; that lowered the interest rates on loans and mortgages to a minimum and from that moment a game called "inflation, inflation and more inflation" begun. Low interest rates on loans led to the fact that the growth of real estate for the period from the end of 2020 to the spring of 2022 around the world was at a record high level, especially in the countries with the most developed economies. Following the real estate price increase, all goods and services prices started to climb. Let's look at the causes of inflation, how it will affect our lives, whether it will affect the businesses growth, and what part the Russia's war in Ukraine played in the inflation boost.

Some people know the word “inflation” but do not really understand why it happens. So what is inflation? Inflation is an increase in the general price level of services and goods in an economy over time. In other words, the value of money is changing over time, and you can’t buy the same products for the same amount of money after a while.

There can be many reasons for inflation but one of the biggest mentioned above was adding more money into the economy by the government to support people during the hard times such as the COVID-19 pandemic to avoid economic crisis. When the government increases the money supply faster than the real economy is growing, inflation is happening. In such a situation, the increase in money circulating in an economy is higher than the increase in goods produced and that means the first step to a high inflation.

How the high inflation impacts our life

During the COVID-19 pandemic people started to spend less money on a lot of regular purchases, consumer services and entertainment, vacations, etc. The reason of lower consumption was that some people were short of money, and some simply didn’t need services and goods as they were locked in their houses for months – so the demand for many goods and services dropped sharply. Governments understand that such spending habits change will result in economy decline. To prevent such scenario, the federal government lowered the interest rate as much as possible. For example, in US and Canada it was dropped to just 0.25% per year. The low interest rates promoted more active consumer spending, but significantly impacted on the real estate market. Property prices started growing beyond all the predictions. The single-family house prices during the COVID-19 pandemic increased by 18.7%, from the first quarter of 2021 to the first quarter of 2022. It’s the highest growth seen in at least 31 years. And this statistics shows only the average growth rate, but in some cities the real estate prices increases reached 43.6% as in Meridian, Idaho, 38% in Austin, Texas and 42% in Vancouver, Canada.

As an avalanche thundering down the mountain, the prices started increasing on almost everything – property, cars, building materials, fuel, food and consumer goods. The small business that provides services increased the prices on their services as they needed to earn more to support their families with the higher prices on food and goods. While the wheel of inflation was rolling faster and faster, the world arrived at February 2022, which brought a new serious blow to all who were thinking the inflation wheel should slow down soon – on February 24th, Russia invaded Ukraine with a full-scale war.

How Russia’s war in Ukraine influenced the global inflation?

Why is the war in Ukraine increasing inflation? The answer is simple – because of the oil and gas that Russia produces. Russia is the world's third-largest oil producer behind the United States and Saudi Arabia and the second-largest producer of natural gas, behind the United States. The sanctions imposed on Russia with the goal to motivate Russia to end the war accelerated the prices of oil and gas. Each product manufacturing and delivery to the consumer includes some cost of oil or gas, either as the raw materials used in production, or as the fuel to transport the goods, or as the source of electrical energy needed for the production. The increased oil and gas prices impacted the cost of fuel, materials, food, transportation and utilities for people and businesses, and became another booster for the inflation.

The inflation impacted not just the real estate, food and consumer goods pricing. It heavily impacted the labor cost as well. Business owners are under pressure to increase salaries and they can win this game only if the company’s revenue is also increasing. According to the Labor Department, for the past 12 months, the hourly wages in the private sector rose by 4.8% in average. According to Trading Economics, the actual annual wages increase was 6.68% while the highest wages increase was 14.79%. The labor cost increase drives the product cost rising, which further speeds up the inflation.

As a global economic leader and influencer, the United States started the battle against inflation in the spring of 2022 and many other countries started doing the same steps to stop the growing inflation. To slow down the inflation, the Federal Reserve increased the Federal Funds Rate from 0.25% to 0.50% on March 17, 2022. That happened for the first time in two years, since the last time the rate changed, dropping to 0.25%, was on March 16, 2020. Federal Reserve aggressively increased the rate six more times in 2022, and ended up with the 4.50% rate after the last increase on December 14, 2022. Commercial banking rates depend on the Federal Funds Rate changes. The consumer interest rates depend on the Federal Funds Rate. The increased rate for the mortgages did not just stop the real estate prices rise. The prices for property already significantly dropped for the past 6 months. Many people simply can’t afford high-rate mortgages, and lower demand for real estate drives down the prices.

On August 17, 2022, Joe Biden introduced the Inflation Reduction Act which should also help to control and lower the inflation. Economic analysts predict that this act will slow down the inflation by the middle of 2023.

At the same time businesses start working on their strategy on how to be profitable with the increased labor cost during the inflation. It is not easy to continue growing the business and provide customers with low prices when the business spends more on material and labor costs. To lower the operational costs, businesses need to work smarter and use technology that can help to automate business processes without adding more humans. Business process automation can help saving money that any growing business would have to spend on additional salaries if the staff would need to be increased proportionally.

Artsyl’s Intelligent Process Automation helps businesses to automate document processing smartly. You don’t need extra staff to process for example, thousands of invoices and sales orders – Artsyl InvoiceAction will automatically grab your invoices from the emails or hot folders, analyze and capture the data that you require, match it to the sales orders and transfer the extracted data to your favorite ERP system. The payment approval will request verification if needed and help avoid the double payments problems that many businesses have. The software doesn’t get tired at the end of the day as a human would, so overtime payments or errors due to fatigue don’t happen with the software. Learn more about how invoice processing automation can help your business reduce operational costs and grow your business without adding more staff. We are here to help.